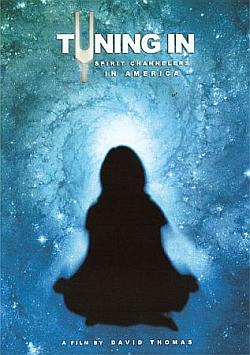 TUNING IN is a truly unique spiritual documentary, the result of 10 years of inquiry into the phenomenon of spirit channeling by Los Angeles filmmaker DavidThomas. Channeling is a practice dating back to antiquity wherein an individual, usually in a trance state, makes a psychic connection with a spirit being. The “channeler” is then able to act as a dimensional go-between in bringing other humans in contact with the entity, as well as interpreting messages from the entity.

For the very first time, six of North America’s most prominent “channelers” are featured in the same film. Viewers gain a rare glimpse and insight into the phenomenon, as well as the information being received by these “channelers”. The entities coming through each have a strong and distinct personality and were interviewed at length by the filmmaker. The result is truly remarkable. The messages cross through space and time, and it appears the entities are speaking as one, delivering a clear and profound message of empowerment for humankind.
Could this be the next great spiritual movement? There are millions of followers devoted to receiving the messages of these spiritual “channelers” in NorthAmerica alone.

TUNING IN will also be soon released as a book under the same name and is published by Hampton Road Publishing.
To see the preview trailer click here